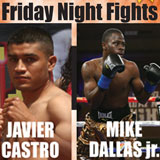 Review: 2012-06-22, nice TKO in the sixth round but the previous rounds have not been particularly exciting: two stars for Mike Dallas Jr vs Javier Castro (we suggest you to watch only the sixth period). Mike Dallas Jr (18-2-1) entered as the No.27 light welterweight in the world while Javier Castro (27-4-0) entered as the No.48. Dallas Jr vs Castro is valid for the interim WBO Latino light welterweight title. Watch the video!