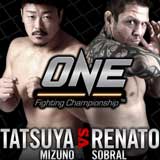 Review: 2012-06-23, great start and very nice submission in the first round: Renato Sobral vs Tatsuya Mizuno gets three stars. Tatsuya Mizuno ranked as the No.31 light heavyweight the world, entered the fight with a record of 11-7-0 while Renato “Babalu” Sobral had a record of 36-9-0 (Sobral is not ranked as he hasn’t fought since December 4, 2010 when he was defeated by Dan Henderson). “Babalu” Sobral vs Mizuno is the main event of “ONE FC 4: Destiny of Warriors”. Watch the video!

Event: ONE FC 4: Destiny of Warriors