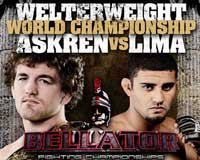 Review: 2012-04-06, good first round but but the rest of the fight has not been particularly exciting: two stars for Ben Askren vs Douglas Lima (fight ended by unanimous decision). The undefeated Ben Askren (9-0-0) entered as the No.17 welterweight in the world while Douglas Lima (21-4-0) entered as the No.13. Askren vs Lima is valid for the Bellator Welterweight Championship title (Askren’s first defense) – Bellator 64. Watch the video!