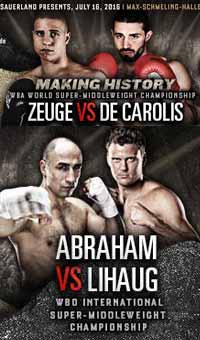 The former Ibf Mw and Wbo super-Mw champion Arthur Abraham entered this fight with a pro record of 44-5-0 (29 knockouts) and he is ranked as the No.7 super middleweight in the world but he comes off the loss against #1 Gilberto Ramirez (=Abraham vs Ramirez).
His opponent, Tim Robin Lihaug, has an official boxing record of 15-1-0 (8 knockouts) and he entered as the No.74 in the same weight class. He suffered his only loss when he faced Oscar Ahlin in 2013, since then he has collected 12 consecutive victories. Abraham vs Lihaug is valid for the vacant WBO International super middleweight title; undercard of Tyron Zeuge vs Giovanni De Carolis. Watch the video and rate this fight!