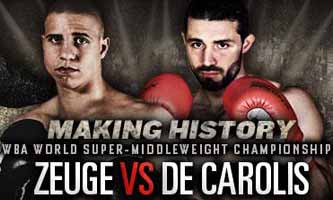 Review by AllTheBestFights.com: 2016-07-16, some good exchanges between Tyron Zeuge and Giovanni De Carolis but it is not enough to get three stars: it gets two.

The undefeated Tyron Zeuge entered this fight with a perfect boxing record of 18-0-0 (10 knockouts) and he is ranked as the No.18 super middleweight in the world. He has already fought once in 2016 winning over Ruben Eduardo Acosta.
His opponent, the Giovanni De Carolis, has an official record of 24-6-0 (12 knockouts) and he entered as the No.16 in the same weight class. He lost to Vincent Feigenbutz in 2015 (controversial decision, Feigenbutz vs De Carolis I) but he took revenge on the German in 2016 winning the Wba world belt (=Feigenbutz vs De Carolis II). Zeuge vs De Carolis is valid for the WBA and GBU world super middleweight titles. Watch the video and rate this fight!

Their next fight: Giovanni De Carolis vs Tyron Zeuge 2