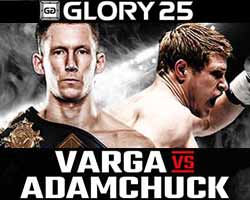 Review by AllTheBestFights.com: 2015-11-06, fight not so exciting between Gabriel Varga and Sergey Adamchuk: it gets two stars.

The black belt in karate and former Wkn Lw champion Gabriel Varga entered this fight with a pro record of 11-2-0 (1 knockout) and he is ranked as the No.4 welterweight in the world. He suffered his last defeat in 2013 when he faced Yuta Kubo (semifinal of the Glory Fw tournament), since then he has collected four victories winning the Glory Fw title in his last bout against Mosab Amrani (=Varga vs Amrani).
His opponent, Sergey Adamchuk, has a record of 30-5-0 (14 knockouts) and he entered as the No.6 in the same weight class. He has already fought and won four times in 2015 beating Dino Kacar, Marat Grigorian, Kazuya Hakimoto and Anvar Boynazarov. Varga vs Adamchuk is valid for the Glory featherweight title (Varga’s first defense); undercard of Robin van Roosmalen vs Sitthichai Sitsongpeenong – Glory 25. Watch the video and rate this fight!