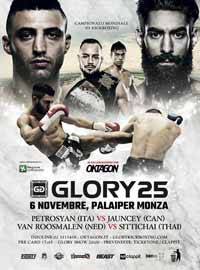 Review by AllTheBestFights.com: 2015-11-06, pretty good fight between Karim Ghajji and Yoann Kongolo: it gets three stars.

The ISKA world champion Karim Ghajji entered this fight with a professional record of 94-11-1 (50 knockouts) and he is ranked as the No.8 super middleweight in the world. He suffered his last defeat in 2013 when he faced Alexander Stetsurenko, since then he has collected seven consecutive victories taking revenge on Stetsurenko last year and beating Ruben Garcia Gonzales in his last bout.
His opponent, the black belt in karate Yoann Kongolo, has an official record of 60-5-0 (40 knockouts) and he entered as the No.9 in the same weight class. He lost to Roberto Cocco in 2014 (via split decision), but then he has won four fights defeating Cedric Doumbe in his last one. Ghajji vs Kongolo is the semifinal of Glory welterweight contender tournament; undercard of Robin van Roosmalen vs Sitthichai Sitsongpeenong – Glory 25. Watch the video and rate this fight!