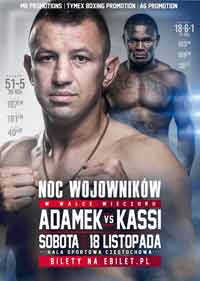 Review by AllTheBestFights.com: 2017-11-18, some good exchanges between Tomasz Adamek and Fred Kassi but it is not enough to get three stars: it gets two.

The former world champion in two different weight classes Tomasz Adamek entered this fight with a pro boxing record of 51-5-0 (30 knockouts) and he is ranked as the No.21 heavyweight in the world. He lost to Eric Molina in 2016 (=Adamek vs Molina) but he came back to win in 2017 with Solomon Haumono (=Adamek vs Haumono).
His opponent, Fred Kassi, has a record of 18-6-1 (10 knockouts) but he is not ranked as he hasn’t fought since August 19, 2016 when he was defeated by Jarrell Miller (=Miller vs Kassi). Before this bout he had also lost to Hughie Fury (=Fury vs Kassi) and Dominic Breazeale (=Breazeale vs Kassi). Adamek vs Kassi is valid for the vacant Republic of Poland International heavyweight title. Watch the video and rate this fight!