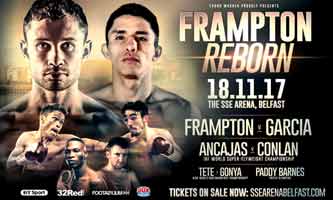 Review by AllTheBestFights.com: 2017-11-18, great fight between Carl Frampton and Horacio Garcia: it gets three stars.

The former world champion in two different weight classes Carl Frampton entered this fight with a boxing record of 23-1-0 (14 knockouts) and he is ranked as the No.2 featherweight in the world. In his last two bouts he faced current #1 Leo Santa Cruz defeating the Mexican in 2016 (=Santa Cruz vs Frampton I) and losing the rematch (=Frampton vs Santa Cruz II).
His opponent, Horacio Garcia, has an official record of 33-3-1 (24 knockouts) and he entered as the No.50 in the same weight class. He has already fought four times in 2017 beating Josue Veraza, Fernando Vargas and Diuhl Olguin; before this bout he had lost to Olguin in their first clash. Frampton vs Garcia is the main event of the evening. Watch the video and rate this fight!