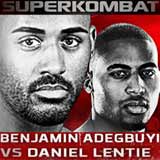 Review by AllTheBestFights.com: 2015-03-07, nice and tough fight between Benjamin Adegbuyi and Daniel Lentie: it gets three stars.

Benjamin Adegbuyi entered this fight with a professional kickboxing record of 22-2-1 (13 knockouts) and he is ranked as the No.4 heavyweight in the world while his opponent, Daniel Lentie, has an official record of 66-12-1. Adegbuyi suffered his last defeat in 2012 when he faced Pavel Zhuravlev (=Zhuravlev vs Adegbuyi); since then he has won eight consecutive fights taking revenge on Zhuravlev in 2013 (=Adegbuyi vs Zhuravlev 2) and beating Hesdy Gerges in his last bout (Glory heavyweight title eliminator). Adegbuyi vs Lentie is the main event of SuperKombat WGP I 2015. Watch the video and rate this fight!