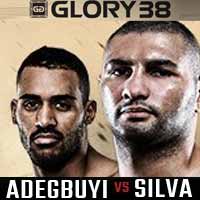 Review by AllTheBestFights.com: 2017-02-24, great fight between Benjamin Adegbuyi and Anderson Braddock Silva: it gets three stars.

Benjamin Adegbuyi entered this fight with a pro kickboxing record of 27-4-0 (16 knockouts) and he is ranked as the No.2 heavyweight in the world. He lost to #1 Hw Rico Verhoeven in 2015 (=Verhoeven vs Adegbuyi 2) but then he has won five consecutive fights beating Hesdy Gerges and Mladen Brestovac in his last two.
His opponent, Anderson Braddock Silva, has a record of 41-15-1 (26 knockouts) and he entered as the No.11 in the same weight class but he won just two out of his last seven bouts, the last one with Rico Verhoeven (=Verhoeven vs Silva). Benjamin Adegbuyi vs Anderson Braddock Silva is on the undercard of Artem Vakhitov vs Saulo Cavalari 3 – Glory 38. Watch the video and rate this fight!