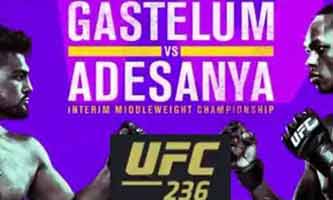 Review by AllTheBestFights.com: 2019-04-13, nice exchanges between Kelvin Gastelum and Israel Adesanya: it gets three stars (UFC Fight of the Night).

The Tuf 17 winner Kelvin Gastelum entered this fight with a pro mma record of 15-3-0 (67% finishing rate) and he is ranked as the No.4 middleweight in the world (currently the #1 in this division is Robert Whittaker). He lost to Chris Weidman in 2017 (Weidman vs Gastelum) but then he has beat Michael Bisping (Michael Bisping vs Kelvin Gastelum) and Ronaldo Souza (Kelvin Gastelum vs Ronaldo Jacare Souza).
His opponent, the undefeated former Glory kickboxing fighter Israel Adesanya, has a perfect record of 16-0-0 (81% ko/tko victory rate – he has never won via submission) and he entered as the No.7 in the same weight class. In his last three bouts he has won over Brad Tavares (Brad Tavares vs Israel Adesanya), Derek Brunson (Derek Brunson vs Israel Adesanya) and Anderson Silva (Israel Adesanya vs Anderson Silva). Gastelum vs Adesanya is valid for the interim UFC middleweight championship title; undercard of Max Holloway vs Dustin Poirier 2 – UFC 236. Watch the video and rate this fight!

Gastelum’s next fight: Kelvin Gastelum vs Darren Till