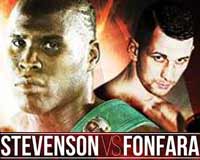 Review: 2014-05-24, nice and tough fight between Adonis Stevenson and Andrzej Fonfara: it gets three stars. Adonis Stevenson entered this fight with a professional boxing record of 23-1-0 (20 KOs=87%) and he is ranked as the No.1 light heavyweight in the world, he suffered his only defeat in 2010 when he faced Darnell Boone for the first time but in their second bout the Canadian took revenge on the American (on March 22, 2013, Stevenson vs Boone 2); after this fight ‘Superman’ Stevenson won the WBC light-Hw title beating Chad Dawson (The Ring magazine Knockout of the Year 2013: Dawson vs Stevenson) and he successfully defended the belt against Tavoris Cloud (=Stevenson vs Cloud) and Tony Bellew (=Stevenson vs Bellew).
His opponent, Andrzej Fonfara, has an official record of 25-2-0 (15 knockouts) and he entered as the No.8 in the same weight class, he suffered his last defeat in 2008 when he was just 20 years old and he faced Derrick Findley (Fonfara is 10 years younger than Stevenson), since then he has collected 15 consecutive wins and one no-contest; in 2012 he won the vacant IBO light-Hw title beating Tommy Karpency (=Fonfara vs Karpency). Stevenson vs Fonfara is valid for the WBC light heavyweight title (Stevenson’s third defense); they also faced each other a second time on June 3, 2017 (=Adonis Stevenson vs Andrzej Fonfara 2). Watch the video and rate this fight!

Video: (Free embeddable video hosted on myvideo.ge and not uploaded by AllTheBestFights, to report it please visit this link where the video is hosted)

Alternative highlights video hosted on Nicovideo.jp at this link