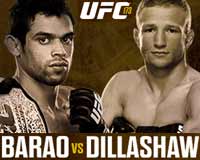 Review: 2014-05-24, good fight between Renan Barao and TJ Dillashaw: it gets three stars (UFC Performance and UFC Fight of the Night). The black belt in Brazilian jiu-jitsu Renan ‘Barao’ Pegado entered this fight with a professional mma record of 32-1-0 (69% finishing rate) and he is ranked as the No.1 bantamweight in the world, he suffered his only defeat in his first pro mma fight in 2005 when he faced Joao Paulo Rodrigues de Souza. Barao won the the interim Ufc Bw title in 2012 against Urijah Faber (=Barao vs Faber) and he successfully defended the belt three times.
His opponent, TJ Dillashaw, has an official record of 9-2-0 (67% finishing rate) and he entered as the No.12 in the same weight class, he suffered his last defeat at the end of 2013 when he faced Raphael Assuncao (=Assuncao vs Dillashaw) but he came back to victory in 2014 beating Mike Easton (=Dillashaw vs Easton). Barao vs Dillashaw, main event of Ufc 173, is valid for the UFC bantamweight title (Barao’s fourth defense). Watch the video and rate this fight!