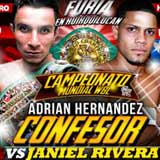 Review: 2014-02-08, pretty good finish between Adrian Hernandez and Janiel Rivera but it is not enough to get three stars. The WBC champion Adrian Hernandez entered this fight with a pro boxing record of 28-2-1 (17 knockouts) and he is ranked as the No.1 light flyweight in the world, he won the World Boxing Council title in 2011 against Gilberto Keb Baas but during the same year he lost it to Kompayak Porpramook (=five-stars-fight Kompayak vs Hernandez), then he won the rematch against the Thai boxer in 2012 (=Hernandez vs Kompayak 2) and he still held the title after three consecutive defenses).
Janiel Rivera is just 22 years old (six years younger than Hernandez) and has an official record of 10-1-2 (6 knockouts) but all his previous opponents have an inconsistent record and he is at his first world title shot. ‘El Confesor’ Hernandez vs Rivera is valid for the WBC light flyweight title. Watch the video and rate this fight!