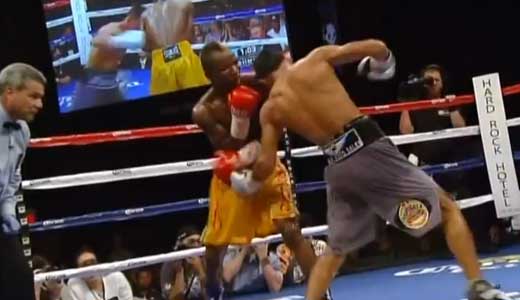 Review: 2011-08-13, very exciting fight between Abner Mares (21-0-1) and “King Kong” Joseph Agbeko (28-2-0), final of the Showtime bantamweight tournament. In the first round Agbeko went down and the referee counted him but the replay shows that it was a slip, then the fight went on with a high pace but the referee Russell Mora continued to commit several mistakes. In fact Mares threw a number of low blows throughout the fight but Mora did not take a point to the Mexican, moreover in the eleventh round the referee counted Joseph Agbeko a second time, but it was a low blow! The fight was close but the majority decision of the judges would have not been without Mora’s mistakes. The fight Agbeko vs Mares was valid for the IBF and WBC Silver bantamweight titles. Watch the video!

Their second and next fight: Abner Mares vs Joseph Agbeko 2