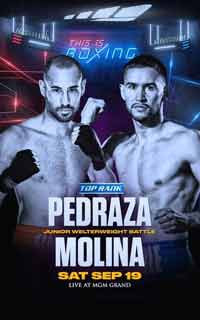 Review by AllTheBestFights.com: 2020-09-19, pretty boring fight between Efe Ajagba and Jonathan Rice: it gets two stars.
The undefeated former Olympian Efe Ajagba entered this fight with a perfect record of 13-0-0 (11 KOs=85%) and he is ranked as the No.23 heavyweight in the world. In his last three fights he has won over Ali Eren Demirezen (Efe Ajagba vs Ali Eren Demirezen), Iago Kiladze (Efe Ajagba vs Iago Kiladze) and Razvan Cojanu (Efe Ajagba vs Razvan Cojanu).
His opponent, Jonathan Rice, has a boxing record of 13-5-1 (9 knockouts) and he entered as the No.111 in the same weight class but he comes off the loss against Demsey McKean; before this bout, in 2019, he had beat Christian Mariscal. Rice vs Ajagba is on the undercard of Jose Pedraza vs Javier Molina. Watch the video and rate this fight!