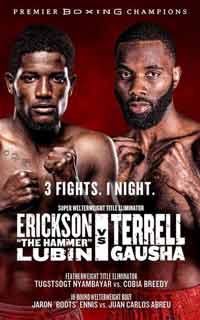 Review by AllTheBestFights.com: 2020-09-19, disappointing fight between Erickson Lubin and Terrell Gausha: it gets two stars.
Erickson Lubin entered this fight with a professional boxing record of 22-1-0 (16 knockouts) and he is ranked as the No.10 super welterweight in the world. He suffered his only loss when he faced current #1 super-Ww Jermell Charlo in 2017 (Jermell Charlo vs Erickson Lubin), after this bout he has won four fights beating Zakaria Attou (Erickson Lubin vs Zakaria Attou) and Nathaniel Gallimore in his last two (Erickson Lubin vs Nathaniel Gallimore).
His opponent, the former Olympian Terrell Gausha, has an official record of 21-1-1 (10 knockouts) and he entered as the No.23 in the same weight class. He also lost his only bout in 2017, against Erislandy Lara (Erislandy Lara vs Terrell Gausha), but then he has defeated Joey Hernandez in 2018 and he has tied with Austin Trout in 2019 (Austin Trout vs Terrell Gausha). Gausha vs Lubin is valid for the vacant WBC Silver super-welterweight title. Watch the video and rate this fight!