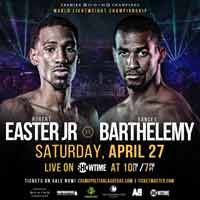 Review by AllTheBestFights.com: 2019-04-27, one sided fight between Efe Ajagba and Michael Wallisch: it gets two stars.

The undefeated former Olympian Efe Ajagba entered this fight with a perfect record of 9-0-0 (8 KOs=89%) and he is ranked as the No.52 heavyweight in the world. In his last three fights he has won over Nick Jones, Santino Turnbow and Amir Mansour (Efe Ajagba vs Amir Mansour).
His opponent, Michael Wallisch, has an official record of 19-1-0 (12 knockouts) and he entered as the No.151 in the same weight class. He fought three times in 2018 beating Samir Barakovic and Bernard Adie but then he lost to Christian Hammer. Ajagba vs Wallisch is on the undercard of Robert Easter Jr vs Rances Barthelemy. Watch the video and rate this fight!