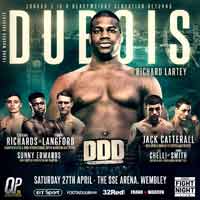 Review by AllTheBestFights.com: 2019-04-27, pretty good fight between Daniel Dubois and Richard Lartey: it gets three stars.

The undefeated Daniel Dubois entered this fight with a perfect record of 10-0-0 (9 KOs=90%) and he is ranked as the No.47 heavyweight in the world. In his last three fights he has won over Tom Little, Kevin Johnson and Razvan Cojanu (Daniel Dubois vs Razvan Cojanu).
His opponent, Richard Lartey, has a boxing record of 14-1-0 (11 KOs=79%) and he entered as the No.335 in the same weight class. He suffered his only loss when he faced Ergun Mersin in 2014 but since then he has won eight consecutive fights beating Boniface Kabore and Morris Okola in 2018. Dubois vs Lartey is the main event of the evening. Watch the video and rate this fight!