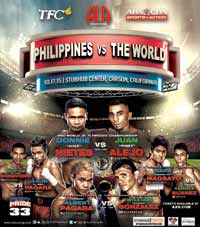 Review by AllTheBestFights.com: 2015-10-17, good fight between Albert Pagara and William Gonzalez: it gets three stars.

The 21-year-old undefeated Albert Pagara (13 years younger than Gonzalez) entered this fight with a perfect boxing record of 24-0-0 (17 knockouts) and he is ranked as the No.11 super bantamweight in the world. He has fought twice in 2015 winning over Rodolfo Hernandez (=Pagara vs Hernandez) and Jesus Rios.
His opponent, William Gonzalez, has an official record of 27-5-0 (23 KOs=85%) but he is not ranked as he hasn’t fought since May 9, 2014 when he defeated Cornelius Lock. Pagara vs Gonzalez is on the undercard of Donnie Nietes vs Juan Alejo – Pinoy Pride 33. Watch the video and rate this fight!