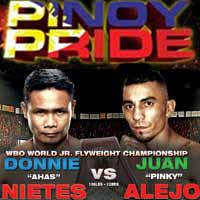 Donnie Nietes entered this fight with a pro boxing record of 36-1-4 (21 knockouts) and he is ranked as the No.2 light flyweight in the world (currently the #1 in this division is Pedro Guevara). He suffered his only loss in 2004 when he faced Angky Angkotta (via split decision), since then he has collected 25 victories and three draws winning the Wbo belt in 2011, against Ramon Garcia Hirales, and successfully defended it seven times.
His opponent, Juan Alejo, has a record of 21-3-0 (13 knockouts) and he entered as the No.24 in the same weight class. Curiously he lost his first three pro bouts and then he has won 21 consecutive bouts beating Jose Rivas in his last one. ‘Ahas’ Nietes vs Alejo is valid for the WBO World light flyweight title (Nietes’ eighth defense) – Pinoy Pride 33. Watch the video and rate this fight!