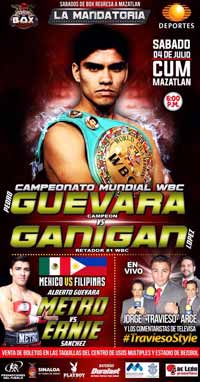 Review by AllTheBestFights.com: 2015-07-04, fight not particularly good between Alberto Guevara and Oscar Blanquet: it gets two stars.

Alberto Guevara entered this fight with a pro boxing record of 20-2-0 (7 knockouts) and he is ranked as the No.25 super bantamweight in the world. He lost to Shinsuke Yamanaka in 2013 (fight valid for the Wbc Bw title, Yamanaka vs Guevara) but then he came back to win beating Manuel Jimenez and Jairo Hernandez.
His opponent, Oscar Blanquet, has a record of 32-10-1 (23 knockouts) and he entered as the No.87 bantamweight but he comes off six consecutive defeats, the last one against Julio Ceja (=Ceja vs Blanquet). ‘Metro’ Guevara vs Blanquet is on the undercard of Pedro Guevara vs Ganigan Lopez. Watch the video and rate this fight!