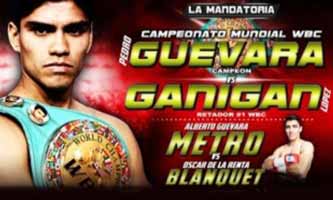 Review by AllTheBestFights.com: 2015-07-04, disappointing fight between Pedro Guevara and Ganigan Lopez: it gets two stars.

Pedro Guevara entered this fight with a professional boxing record of 25-1-1 (17 knockouts) and he is ranked as the No.1 light flyweight in the world. He suffered his only loss in 2012 when he faced John Riel Casimero (via split decision, Casimero vs Guevara), since then he has collected seven consecutive victories winning the vacant Wbc title last year, against Akira Yaegashi (=Yaegashi vs Guevara), and defending it once in 2015 with Richard Claveras (=Guevara vs Claveras).
His opponent, Ganigan Lopez, has an official record of 25-5-0 (16 knockouts) and he entered as the No.5 in the same weight class. He lost in 2012 as well, against Denver Cuello, and then he has won five bouts beating Mario Rodriguez (=Lopez vs Rodriguez) and Genaro Rios in 2014. ‘Jibran’ Guevara vs Lopez is valid for the WBC World light flyweight title (Guevara’s second defense). Watch the video and rate this fight!