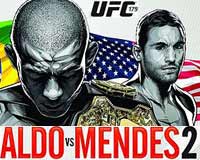 Review: 2014-10-25, nice and tough exchanges between Jose Aldo and Chad Mendes: their second fight is close to get four stars (UFC Fight of the Night). The black belt in Brazilian jiu-jitsu Jose Aldo entered this fight with a professional mma record of 24-1-0 (67% finishing rate) and he is ranked as the No.1 featherweight in the world, he suffered his only defeat in 2005 when he faced Luciano Azevedo, since then he has won 17 consecutive bouts, the lost one against (=Aldo vs Lamas).
His opponent, Chad Mendes, has an official record of 16-1-0 (50% finishing rate) and he entered as the No.3 in the same weight class, his only loss came in 2012 to Aldo in their first bout (=Aldo vs Mendes I); after that fight he won five times, the last one against Nik Lentz (=Mendes vs Lentz). Aldo vs Mendes 2, main event of Ufc 179, is valid for the UFC featherweight title (held by Aldo). Watch the video and rate this fight!