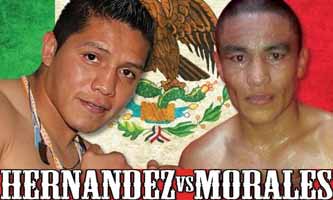 Review by AllTheBestFights.com: 2015-08-07, disappointing fight between Alejandro Hernandez and Humberto Morales: it gets two stars.

The former Wbo Bw champion Alejandro Hernandez entered this fight with a pro boxing record of 29-11-2 (15 knockouts) and he is ranked as the No.8 bantamweight in the world while his opponent, Humberto Morales, has a record of 14-11-4 (8 knockouts) and he entered as the No.68 in the same weight class (currently the #1 in this division is Shinsuke Yamanaka). Hernandez lost to Tomoki Kameda last year (=Kameda vs Hernandez) but he came back to win in 2015 beating Martin Casillas (=Hernandez vs Casillas). ‘Payasito’ Hernandez vs Morales is valid for the vacant Mexico super bantamweight title. Watch the video and rate this fight!