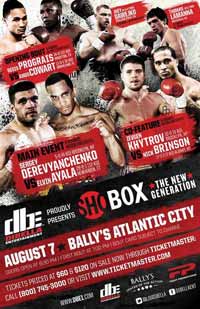 Review by AllTheBestFights.com: 2015-08-07, pretty good finish but it is not enough to get three stars: Ievgen Khytrov vs Nick Brinson gets two.

The 2011 world amateur boxing champion Ievgen Khytrov entered this fight with a perfect record of 10-0-0 (9 KOs=90%) and he is ranked as the No.24 middleweight in the world while his opponent, Nick Brinson, has a record of 17-3-2 (7 knockouts) and he entered as the No.74 in the same weight class. Both boxers have already fought in 2015: Khytrov has won over Maurice Louishomme, Jorge Melendez (=Khytrov vs Melendez) and Aaron Coley (=Khytrov vs Coley) while Brinson defeated Marqus Jackson; before this fight Nick had lost to Andre Dirrell (=Dirrell vs Brinson). Khytrov vs Brinson is on the undercard of Sergiy Derevyanchenko vs Elvin Ayala. Watch the video and rate this fight!