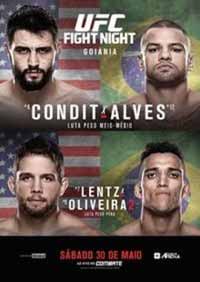 Review by AllTheBestFights.com: 2015-05-30, pretty good finish between KJ Noons and Alex Oliveira: it gets three stars.

The black belt in karate KJ Noons entered this fight with a mma record of 13-7-0 (69% ko/tko victory rate – he has never won via submission) and he is ranked as the No.55 lightweight in the world while his opponent, Alex Oliveira, has an official record of 10-2-1 (90% finishing rate). Noons vs Oliveira is on the undercard of Carlos Condit vs Thiago Alves – UFC Fight Night 67. Watch the video and rate this fight!