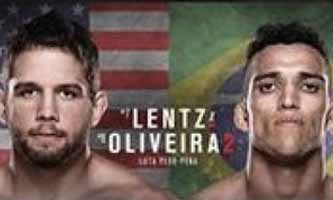 Review by AllTheBestFights.com: 2015-05-30, great performance by both fighters: Nik Lentz vs Charles Oliveira 2 gets three stars (UFC Fight of the Night and Performance of the Night).

Nik Lentz entered this fight with a pro mma record of 25-6-2 (64% finishing rate) and he is ranked as the No.10 featherweight in the world. He suffered his last defeat in 2013 when he faced Chad Mendes (=Mendes vs Lentz), after this bout he fought just once beating Manny Gamburyan.
His opponent, the black belt in Brazilian jiu-jitsu Charles Oliveira, has a record of 19-4-0 (89% finishing rate) and he entered as the No.12 in the same weight class. He lost two consecutive fights between 2012 and 2013, against Cub Swanson (=Swanson vs Oliveira) and Frankie Edgar (=Edgar vs Oliveira), but since then he has won three bouts beating Jeremy Stephens in his last one (=Stephens vs Oliveira). The first fight between Lentz and Oliveira ended in a no-contest due to an illegal knee (June 26, 2011); this second bout is the co-main event of UFC Fight Night 67 Condit vs Alves. Watch the video and rate this fight!