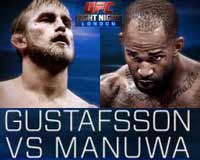 Review: 2014-03-08, pretty good fight between Alexander Gustafsson and Jimi Manuwa: it gets three stars (UFC Fight of the Night and UFC Performance of the Night). Alexander Gustafsson entered this fight with a professional mma record of 15-2-0 (80% finishing rate) and he is ranked as the No.4 light heavyweight in the world, last year he fought just once facing and losing to the Ufc champ Jon Jones in a fight valid for the Ufc light heavyweight title (the bout was very close and it was rated four stars by our users =Jon Jones vs Gustafsson).
His opponent, the undefeated Jimi Manuwa, has a perfect record of 14-0-0 (100% finishing rate with just one submission victory) and he entered as the No.16 in the same weight class, last year he fought twice winning both fights by tko; currently the #1 in this division is Jon Jones. Gustafsson vs Manuwa is the main event of UFC Fight Night 38. Watch the video and rate this fight!