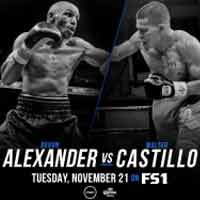 Review by AllTheBestFights.com: 2017-11-21, fight not so exciting between Devon Alexander and Walter Castillo: it gets two stars.

The former world champion in two different weight classes Devon Alexander entered this fight with a professional boxing record of 26-4-0 (14 knockouts) while his opponent, Walter Castillo, has an official record of 26-4-1 (19 knockouts). Both boxers are not ranked as they haven’t fought for more than one year: in their last fight Alexander had lost to Aaron Martinez (=Alexander vs Martinez) while Castillo was defeated by Sergey Lipinets (=Lipinets vs Castillo). Alexander vs Castillo is th main event of the evening. Watch the video and rate this fight!