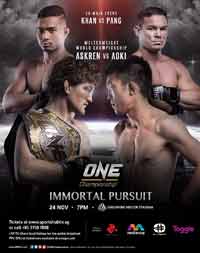 Review by AllTheBestFights.com: 2017-11-24, one sided fight between Ben Askren and Shinya Aoki: it gets two stars.

The undefeated former Bellator Ww and current ONE FC champion Ben Askren entered this fight with a perfect mma record of 17-0-0 (59% finishing rate) and he is ranked as the No.33 middleweight in the world. He has already fought twice in 2017 winning over Agilan Thani (=Askren vs Thani) and Zebaztian Kadestam (=Askren vs Kadestam).
His opponent, the black belt in Bjj, judo and former One Fc Lw champion Shinya Aoki, has an official record of 39-7-0 (69% finishing rate) and he comes off the loss against Eduard Folayang (=Aoki vs Folayang). Askren vs Aoki, main event of ONE fc 63, is valid for the ONE welterweight title. Watch the video and rate this fight!