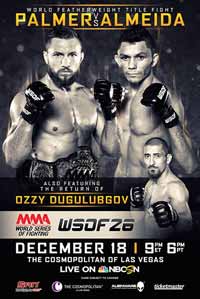 Review by AllTheBestFights.com: 2015-12-18, fight not so exciting between Lance Palmer and Alexandre de Almeida: it gets two stars.

Lance Palmer entered this fight with a professional mma record of 10-1-0 (60% submission victory rate – he has never won by ko/tko) and he is ranked as the No.24 featherweight in the world. He suffered his only loss when he faced Georgi Karakhanyan in 2013 (=Karakhanyan vs Palmer), since then he has won three consecutive fights beating Chris Horodecki in his last one (=Palmer vs Horodecki).
His opponent, Marcos Alexandre Campos de Almeida, has an official record of 17-5-0 (88% finishing rate) and he entered as the No.88 in the same weight class. Alexandre ‘Capitao’ de Almeida lost to Fabiano Silva da Conceicao in 2013 but then he has won four bouts defeating Saul Almeida in 2015. Palmer vs Almeida, main event of Wsof 26, is valid for the WSOF featherweight title (Palmer’s second defense). Watch the video and rate this fight!