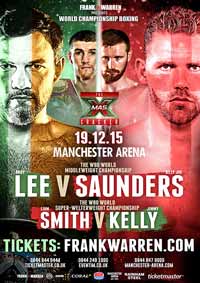 Review by AllTheBestFights.com: 2015-12-19, fight not so exciting between Liam Smith and Jimmy Kelly: it gets two stars.

Both undefeated, the 27-year-old Liam Smith (four years more than Kelly) entered this fight with a boxing record of 21-0-1 (11 knockouts) and he is ranked as the No.19 super welterweight in the world while his opponent, ‘Jimmy’ Kilrain Kelly, has a perfect record of 16-0-0 (7 knockouts) and he entered as the No.82 in the same weight class. Smith has already fought three times in 2015 defeating Robert Talarek, David Ezequiel Romero and John Thompson (bout valid for the vacant Wbo belt, Smith vs Thompson) while Kelly has fought four times beating Martin Fidel Rios in his last one. Smith vs Kelly is valid for the WBO World super welterweight title (Smith’s first defense); undercard of Andy Lee vs Billy Joe Saunders. Watch the video and rate this fight!