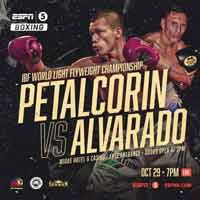 Review by AllTheBestFights.com: 2018-10-29, nice and tough exchanges between Felix Alvarado and Randy Petalcorin: it gets three stars.

Felix Alvarado entered this fight with a professional boxing record of 33-2-0 (29 KOs=88%) and he is ranked as the No.9 light flyweight in the world (currently the #1 in this division is Ken Shiro). He suffered two consecutive losses between 2013 and 2014, against Kazuto Ioka (Ioka vs Alvarado) and Juan Carlos Reveco (4-stars fight, Reveco vs Alvarado), but since then he has won 15 bouts beating Sebastian Sanchez (Felix Alvarado vs Sebastian Sanchez), Eliud De los Santos (Felix Alvarado vs Eliud De los Santos) and Ivan Meneses Flores in 2018.
His opponent, the former interim Wba light-Flw champion Randy Petalcorin, has an official record of 29-2-1 (22 KOs=76%) and he entered as the No.28 in the same weight class. He was defeated by Omari Kimweri in 2016 but then he has won six fights beating Jade Yagahon in his last one. Petalcorin vs Alvarado is valid for the vacant IBF World light flyweight title. Watch the video and rate this fight!