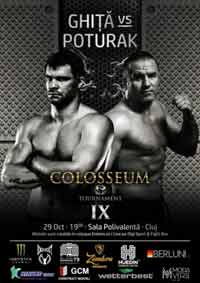 Review by AllTheBestFights.com: 2018-10-29, pretty good fight between Daniel Ghita and Dzevad Poturak 4: it gets three stars.

Daniel Ghita entered this fight with a professional kickboxing record of 50-11-0 (39 KOs=78%) but he is not ranked as he hasn’t fought since June 21, 2014 when he was defeated by Rico Verhoeven (Rico Verhoeven vs Daniel Ghita 2); before this bout, in 2013, he had beat Errol Zimmerman (Daniel Ghita vs Errol Zimmerman 2).
His opponent, the 2014 WAKO Pro world champion Dzevad Poturak, has an official record of 52-33-1 (31 knockouts) but his last victory was in 2015, against Frank Munoz, after this bout he has lost 10 consecutive fights, the last one with Alexey Ignashov. In their previous bouts Poturak defeated Ghita once, in 2008, while in 2010 and 2012 Daniel beat Dzevad (Daniel Ghita vs Dzevad Poturak 3).Ghita vs Poturak 4 is the main event of Colosseum Tournament IX. Watch the video and rate this fight!