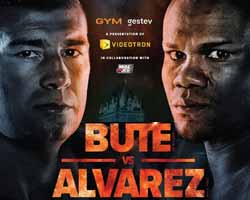 Review by AllTheBestFights.com: 2017-02-24, good fight between Lucian Bute and Eleider Alvarez: it gets three stars.

The undefeated Eleider Alvarez entered this fight with a perfect record of 21-0-0 (10 knockouts) and he is ranked as the No.5 light heavyweight in the world (currently the #1 in this division is Andre Ward). He fought twice last year winning over Robert Berridge (=Alvarez vs Berridge) and Norbert Dabrowski.
His opponent, the former Ibf super-Mw champion Lucian Bute, has a boxing record of 32-3-1 (25 KOs=78%) and he entered as the No.15 in the same weight class but he won just one out of his last four bouts, against Andrea Di Luisa in 2015 (=Bute vs Di Luisa). After this fight he lost to James DeGale (=DeGale vs Bute) and he drew with Badou Jack (=Jack vs Bute). Lucian Bute vs Eleider Alvarez, WBC light heavyweight title eliminator, is the main event of the evening. Watch the video and rate this fight!