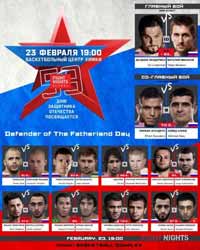 Review by AllTheBestFights.com: 2017-02-23, tough fight with an exciting finish: Vitaly Minakov vs DJ Linderman is close to get four stars!

The undefeated black belt in judo, former Bellator and world combat sambo champion Vitaly Minakov entered this fight with a perfect mma record of 18-0-0 (89% finishing rate) and he is ranked as the No.18 heavyweight in the world. He fought just once in 2016 beating Peter Graham (=Minakov vs Graham).
His opponent, DJ Linderman, has an official record of 20-11-0 (55% finishing rate) and he entered as the No.75 in the same weight class but he lost two out of his last three fights, against Josh Copeland and Fabiano Scherner. After this bout he has defeated Derrick Mehmen. Vitaly Minakov vs DJ Linderman is the main event of Eurasia Fight Nights 59. Watch the video and rate this fight!