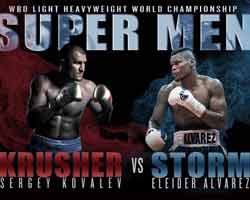 Review by AllTheBestFights.com: 2018-08-04, good fight between Sergey Kovalev and Eleider Alvarez: it gets three stars.

The current Wbo and Iba light-Hw champion Sergey Kovalev entered this fight with a pro boxing record of 32-2-1 (28 KOs=87%) and he is ranked as the No.2 light heavyweight in the world (currently the #1 in this division is Adonis Stevenson). “Krusher” Kovalev lost two consecutive bouts between 2016 and 2017, both with Andre Ward (Kovalev vs Ward I and Ward vs Kovalev II) but then he has beat Vyacheslav Shabranskyy (Sergey Kovalev vs Vyacheslav Shabranskyy) and Igor Mikhalkin (Sergey Kovalev vs Igor Mikhalkin).
His opponent, the undefeated former Olympian Eleider Alvarez, has a perfect record of 23-0-0 (11 knockouts) but he is not ranked as he hasn’t fought since June 3, 2017 when he defeated Jean Pascal (Eleider Alvarez vs Jean Pascal); before this bout, in 2017, he had also beat Lucian Bute (Alvarez vs Bute). Kovalev vs Alvarez is valid for the IBA and WBO World light heavyweight titles. Watch the video and rate this fight!

(Free embeddable video hosted on Youtube and not uploaded by AllTheBestFights)
https://www.youtube.com/watch?v=QhxiNq1-lcY