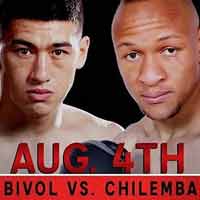 Review by AllTheBestFights.com: 2018-08-04, pretty good fight between Dmitry Bivol and Isaac Chilemba: it gets three stars.

The undefeated Wba light-Hw champion Dmitry Bivol entered this fight with a perfect boxing record of 13-0-0 (11 KOs=85%) and he is ranked as the No.4 light heavyweight in the world (currently the #1 in this division is Adonis Stevenson). In his last three fights he has won over Cedric Agnew (Bivol vs Agnew), Trent Broadhurst (Dmitry Bivol vs Trent Broadhurst) and Sullivan Barrera (Dmitry Bivol vs Sullivan Barrera).
His opponent, the former Ibo super-Mw champion Isaac Chilemba, has an official record of 25-5-2 (10 knockouts) and he entered as the No.14 in the same weight class. He lost three consecutive fights between 2015 and 2016, against Eleider Alvarez (Alvarez vs Chilemba), Sergey Kovalev (Kovalev vs Chilemba) and Oleksandr Gvozdyk (Oleksandr Gvozdyk vs Isaac Chilemba) but he came back to win in 2018 beating Blake Caparello. Bivol vs Chilemba is valid for the WBA World light heavyweight title (Bivol’s second defense); undercard of Sergey Kovalev vs Eleider Alvarez. Watch the video and rate this fight!