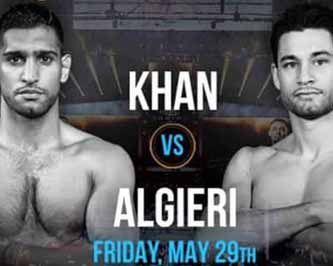 Review by AllTheBestFights.com: 2015-05-29, pretty good fight between Amir Khan and Chris Algieri: it gets three stars.

The former Wba and Ibf light-Ww champion Amir Khan entered this fight with a professional boxing record of 30-3-0 (19 knockouts) and he is ranked as the No.6 welterweight in the world (currently the #1 in this division is Floyd Mayweather Jr). He suffered two consecutive defeats between 2011 and 2012, against Lamont Peterson (=Peterson vs Khan) and Danny Garcia (=Garcia vs Khan), but since then he has won four bouts beating Luis Collazo (=Khan vs Collazo) and Devon Alexander in 2014 (=Khan vs Alexander).
His opponent, the former Wka and Iska kickboxing world champion Chris Algieri, has an official record of 20-1-0 (8 knockouts) and he entered as the No.14 in the same weight class. He won the Wbo super-Lw title in 2014 when he faced Ruslan Provodnikov (=Provodnikov vs Algieri) but then he moved up in weight class to the welterweight division suffering his first loss against Manny Pacquiao (=Pacquiao vs Algieri). Khan vs Algieri is valid for the WBC Silver welterweight title. Watch the video and rate this fight!