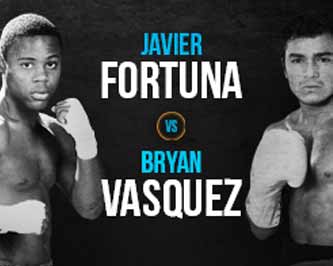 Review by AllTheBestFights.com: 2015-05-29, some good exchanges between Bryan Vasquez and Javier Fortuna but it is not enough to get three stars: it gets two.

Bryan Vasquez entered this fight with a pro boxing record of 34-1-0 (18 knockouts) and he is ranked as the No.5 super featherweight in the world. He suffered his only defeat in 2012 when he faced current #1 super-Fw Takashi Uchiyama (=Uchiyama vs Vasquez), since then he has won five consecutive fights beating Sergio Thompson in his last bout (=Thompson vs Vasquez).
His opponent, the undefeated Javier Fortuna, has a record of 27-0-1 (20 knockouts) and he entered as the No.6 in the same weight class. The only man who stopped him in a draw was Luis Franco in 2013 (=Fortuna vs Franco); after this bout he has won five fights defeating Miguel Taveras in his last one. Vasquez vs Fortuna is valid for the vacant WBA World super featherweight title; undercard of Amir Khan vs Chris Algieri. Watch the video and rate this fight!