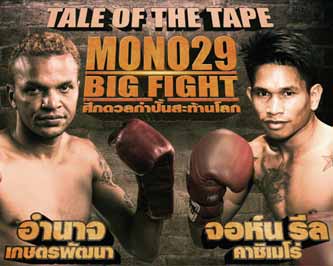 Review by AllTheBestFights.com: 2015-06-27, fight with too much clinching and too many interruptions: Amnat Ruenroeng vs John Riel Casimero gets two stars.

The undefeated Amnat Ruenroeng entered this fight with a perfect boxing record of 15-0-0 (5 knockouts) and he is ranked as the No.7 flyweight in the world (currently the #1 in this division is Roman Gonzalez). He has already fought once in 2015 defeating Zou Shiming (=Ruenroeng vs Shiming).
His opponent, the former IBF light-Flw champion John Riel Casimero, has a record of 21-2-0 (13 knockouts) and he entered as the No.11 in the same weight class. He suffered two consecutive fights between 2010 and 2011, against Ramon Garcia Hirales and Moruti Mthalane when he was just 21 years old but since then he has won seven bouts beating Armando Santos in his last one (=Casimero vs Santos). Ruenroeng vs Casimero is valid for the IBF World flyweight title (Ruenroeng’s fourth defense). Watch the video and rate this fight!