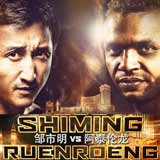 Review by AllTheBestFights.com: 2015-03-07, some good exchanges between Amnat Ruenroeng and Zou Shiming but it is not enough to get three stars: it gets two.

Both undefeated, the Thai Amnat Ruenroeng entered this fight with a perfect boxing record of 14-0-0 (5 knockouts) and he is ranked as the No.10 flyweight in the world (currently the #1 in this division is Roman Gonzalez) while his opponent, the 2008 and 2012 Olympic light flyweight gold medalist Zou Shiming, has a professional record of 6-0-0 (1 knockout) and he entered as the No.27 in the same weight class. Both boxers fought three times in 2014: Ruenroeng won the vacant IBF Flw title against Rocky Fuentes (=Fuentes vs Ruenroeng) and then defended the belt with Kazuto Ioka (=Ioka vs Ruenroeng) and McWilliams Arroyo (=Ruenroeng vs Arroyo) while Shiming defeated Yokthong KKP, Luis De la Rosa (=Shiming vs De la Rosa) and Kwanpichit OnesongchaiGym (=Kwanpichit vs Shiming). Ruenroeng vs Shiming is valid for the IBF World flyweight title (Ruenroeng’s third defense), first world title shot for Shiming. Watch the video and rate this fight!