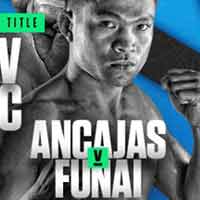 Review by AllTheBestFights.com: 2019-05-04, pretty good fight between Jerwin Ancajas and Ryuichi Funai: it gets three stars.

The Ibf super-Flw champion Jerwin Ancajas entered this fight with a professional record of 30-1-2 (20 knockouts) and he is ranked as the No.7 super flyweight in the world (currently the #1 in this division is Juan Francisco Estrada). He suffered his only loss when he faced Mark Anthony Geraldo in 2012 (via majority decision), since then he has collected 17 victories and one draw, his last bout against Alejandro Santiago Barrios (Jerwin Ancajas vs Alejandro Santiago Barrios); before this bout, in 2018, he had beat Israel Gonzalez (Jerwin Ancajas vs Israel Gonzalez) and Jonas Sultan (Jerwin Ancajas vs Jonas Sultan).
His opponent, Ryuichi Funai, has a boxing record of 31-7-0 (22 knockouts) and he entered as the No.11 in the same weight class. He lost to Sho Ishida in 2016 (via majority decision) but then he has won seven consecutive bouts defeating Victor Emanuel Olivo in his last one. Ancajas vs Funai is valid for the IBF World super flyweight title (Ancajas’ seventh defense); undercard of Artur Beterbiev vs Radivoje Kalajdzic. Watch the video and rate this fight!