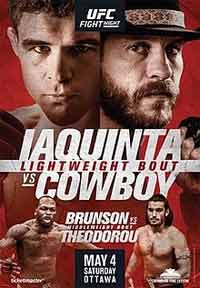 Review by AllTheBestFights.com: 2019-05-04, good start but the rest of the fight was not so exciting: Brad Katona vs Merab Dvalishvili gets two stars.

The undefeated Brad Katona entered this fight with a perfect record of 8-0-0 (37% finishing rate) and he is ranked as the No.37 bantamweight in the world. In his last three fights he has won over Stephen Cervantes, Jay Cucciniello (Brad Katona vs Jay Cucciniello) and Matthew Lopez.
His opponent, Merab Dvalishvili, has an official mma record of 8-4-0 (37% finishing rate) and he entered as the No.65 in the same weight class. He lost two consecutive bouts between 2017 and 2018, against Frankie Saenz and Ricky Simon, but then he has beat Terrion Ware. Katona vs Dvalishvili is on the undercard of Al Iaquinta vs Donald Cerrone – UFC Fight Night 151 (UFC on ESPN+ 9). Watch the video and rate this fight!

(Free embeddable video hosted on Youtube and not uploaded by AllTheBestFights)
https://www.youtube.com/watch?v=UvNULMPKKyQ