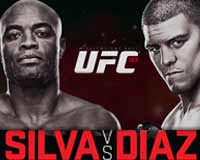 The black belt in Bjj, judo and tae-kwon-do and former Ufc Mw champion Anderson Silva entered this fight with a professional mma record of 33-6-0 (79% finishing rate) while his opponent, the former Strikeforce Ww champion Nick Diaz (black belt in Brazilian jiu-jitsu as well), has an official record of 26-9-0 (81% finishing rate). ‘The Spider’ Silva is 39 years old while Diaz is eight years younger but both fighters are not ranked as they haven’t fought since 2013 and they both lost their last two bouts: the Brazilian was defeated twice by #1 Ufc Mw champion Chris Weidman (=Silva vs Weidman I and Weidman vs Silva II – in this second fight Silva broke his left fibula and tibia) while Nick Diaz lost to Carlos Condit in 2012 (=Condit vs Diaz) and former #1 Ufc Ww champion Georges St Pierre (=St Pierre vs Diaz). ‘The Spider’ Silva vs Diaz is the main event of UFC 183. Watch the video and rate this fight!