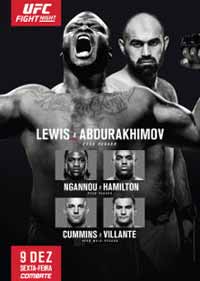 Review by AllTheBestFights.com: 2016-12-09, fight not so exciting between Corey Anderson and Sean O’Connell: it gets two stars.

The Tuf 19 tournament winner Corey Anderson entered this fight with a mma record of 8-2-0 (37% ko/tko victory rate – he has never won via submission) and he is ranked as the No.17 light-heavyweight in the world. He has fought twice in 2016 beating Tom Lawlor (=Anderson vs Lawlor) and losing to Mauricio Shogun Rua (=Shogun Rua vs Anderson).
His opponent, Sean O’Connell, has an official record of 17-8-0 (71% finishing rate) and he entered as the No.53 in the same weight class but he comes off two consecutive losses, against Ilir Latifi and Steve Bosse (4-stars fight, O’Connell vs Bosse). Anderson vs O’Connell is on the undercard of Derrick Lewis vs Shamil Abdurakhimov – UFC Fight Night 102. Watch the video and rate this fight!