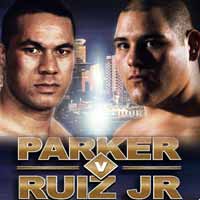 Review by AllTheBestFights.com: 2016-12-10, close fight but not so exciting: Joseph Parker vs Andy Ruiz Jr gets two stars.

Both undefeated, the New Zealander Joseph Parker entered this fight with a perfect boxing record of 21-0-0 (18 KOs=86%) and he is ranked as the No.5 heavyweight in the world (currently the #1 in this division is Luis Ortiz) while his opponent, Andy Ruiz Jr, has an official record of 29-0-0 (19 knockouts) and he entered as the No.21 in the same weight class. Parker has already fought four times in 2016 beating Solomon Haumono (=Parker vs Haumono) and Alexander Dimitrenko in his last two (=Parker vs Dimitrenko) while Ruiz has fought three times beating Ray Austin, Josh Gormley and Franklin Lawrence (=Ruiz vs Lawrence). Parker vs Ruiz is valid for the vacant WBO World heavyweight title. Watch the video and rate this fight!