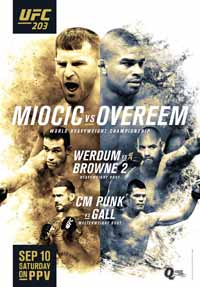 Review by AllTheBestFights.com: 2016-09-10, good fight between Joanne Calderwood and Jessica Andrade: it gets three stars (UFC Performance of the Night).

The 2012 ISKA muay thai world flyweight champion Joanne Calderwood entered this fight with a pro record of 11-1-0 (45% ko/tko victory rate – she has never won via submission) and she is ranked as the No.6 women’s strawweight in the world. She suffered her only defeat against Maryna Moroz last year (=Calderwood vs Moroz) but then she has won over Cortney Casey and Valerie Letourneau.
Her opponent, Jessica Andrade, has an official mma record of 14-5-0 (79% finishing rate) and she entered as the No.9 in the same weight class. She lost to Raquel Pennington in 2015 but she came back to win in 2016 against Jessica Penne. Calderwood vs Andrade is on the undercard of Stipe Miocic vs Alistair Overeem – UFC 203. Watch the video and rate this fight!